A Vision for Middlesex's County Teams

A History of Chess in Brent

Speaking about the history of clubs in the Middlesex area, Willesden & Brent Chess Club Secretary, Anthony Fulton, advises that the club has published a document outlining the history of chess in his borough of Brent. The article has been written in order to show that chess in Brent (actually the former Wembley Urban District and Willesden Municipal Borough) is not alien and it inspires more in the borough to give chess a go!

The article can be found on W&BCC website along with ECF Chess Histories.

Hammersmith Chess Club are intending to celebrate their 60th birthday with a chess congress over the Queen's Platinum Jubilee weekend - 4th and 5th June 2022 - see here for more details. The club were born in August 1962 after the actions of P. Martin to found one. They initially met at Westcott Lodge.

It will be interesting to note that although Hammersmith may be running its first ever congress a Hammersmith Congress did exist beforehand. In January 1968 Thames Valley Chess League (TVCL) and Hammersmith Corporation agreed to run a four-day congress called the Hammersmith Chess Congress. It could only be held as TVCL agreed their Richmond Congress could be held in Hammersmith. The first congress ran from 15th-18th April 1968 and it ran annually until to at least 1976. It will be left to those interested in the chess history of Hammersmith and/or TVCL to complete.

Good luck to Hammersmith on their new venture and an early, 'Happy Birthday!'

A new chess club has formed in the Middlesex area - Stanmore Chess Club.

Their details were found purely by accident when reviewing the ECF's Club Finder's page to identify unaffiliated clubs in Middlesex area who have individuals willing and able to represent one of the county teams. The words of the club's founder are left to speak for themselves:

"We play social chess and offer coaching for beginners and those who want to improve their game. We offer an oportunity to make new chess friends with short demos, instruction and checking of understanding. We are very excited to have moved to Stanmore Library, 8 Stanmore Hill, Stanmore, Harrow, HA7 3BQ as of Tuesday 9th November (and each Tuesday thereafter) from 2.30 – 4.45pm.
Current attendees range in age from 4yrs to 70yrs and include people in business, at school and retired. We promote the skills of logic, reading, numeracy, creativity, language, problem solving and Chess etiquette i.e. we play quietly to help concentration.
Harrow Library services are very pleased to host us and they are looking to utilise the Borough Council website to promote our Chess club in a COVID safe environment." 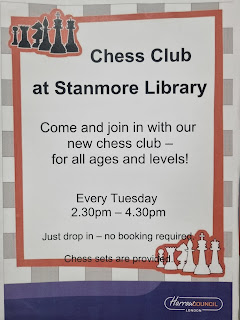 It is hoped that the club will expand beyond their current hours and although based in Harrow consider reaching out to the Edgware area. It has been over 50years since there has been a club in that part of the world and Stanmore could fill the void.
It is also hoped that at some stage Stanmore will affiliate to the Association and take part in its events. Irrespective of affiliation we look forward to their players contacting the county captains in order to represent one of the county's teams.
Stanmore, welcome to Middlesex if not yet the Association!
Email ThisBlogThis!Share to TwitterShare to FacebookShare to Pinterest

A Vision for Middlesex's County Teams

Middlesex's Senior Match Captain, Anthony Fulton, asks us to publish his vision for Middlesex''s county teams.
"Dear Middlesex Chess Players,
I am Anthony Fulton Middlesex's Senior Match Captain. Some of you may know me or seen me at county matches or at Middlesex/Hillingdon/London/Central league matches.
A little background on me. I have this title because I have captained the u2050 team (formerly u175 and u180) since 2006 and Open team since 2007 so am the longest serving Middlesex captain, in fact I am one of the longest serving current captains both regionally and nationally. I recognise my longevity is partly because of wanting to set new records as a Middlesex Captain but in part because of a vision. From the outset of my captaincy both had a low starting base consequently, I have intimate insight into the struggles a match captain has firstly in building a squad and second to organise a team for a specific match, so mentor existing and new county match captains. In spite of my longevity and the successes of my teams it is a constant struggle to maintain a squad if only because being a London-based county there is a high turnover of players however I have been able to do so due to the loyalty of a core of individuals. For those of you who have turned out for any one of my teams, "I thank you". This goes double for you who have turned out or willing to turn out during trying cycles.
Let me share with you a vision I have. County chess has been a staple in the south of England since 1884 when Sussex and Surrey played in the first match. From 1904 'big' county matches were arranged. These matches were 100+boards. After forming in 1907 and affiliating to SCCU Middlesex were not only able to consistently raise these teams but consistently won the titles that were contested for. In 1972 these types of matches were broken up and we have the current system of non-overlapping matches. The only time the overlap can occur is at the National Stage Final when on Finals Day all six matches (Open, Minor, u2050, u1850, u1650 and u1450) are played at the same time.
My vision is that Middlesex has a team in each section on finals day. The Open, u2050, u1850 are consistent qualifiers for the National stage with each reaching finals day at various times, but not all three at the same time. The u1650 is a work in progress, it has been a while since they played in National Stage and certainly consistently. The same applies to u1450 who have qualified a few times in recent times but not as consistently as I'd like or expect. Middlesex's u1450 team should really be one of the strongest in the country. If we are able to get all five teams to finals day once, we would have achieved one of my visions to field a team of 76players so emulate some of the big matches of the past. However, having done it once we would need to repeat and keep repeating. If we were to do this we would show that Middlesex are the best organised county in the country. Of course if all were to win their respective section we would have the undisputed claim of being the best in the country!
With this in mind I write to you with a personal request - please support the county team! Support my vision!
County chess is an important part of the chess pyramid as it affords many benefits. These include:
a) Playing a good quality game of classical chess
b) Playing an opponent of similar standard
c) Playing as a team with individuals whom you may played against in league or tournament chess - think the equivalent of golf's Ryder Cup
d) An opportunity to graduate to a higher team thereby prove improvement and continue to test yourself against your peers.
I could go on but give the main ones.
I hope the sharing of this vision gives you food for thought and either persuades to represent the county for the first time; or better yet reinvigorates your willingness to represent it! The county teams still have a few remaining fixtures for this cycle and all could still qualify for the National Stage should there be one. Get involved.
Go on the Middlesex!"
Email ThisBlogThis!Share to TwitterShare to FacebookShare to Pinterest
Older Posts Home
Subscribe to: Posts (Atom)